Locked in by someone, 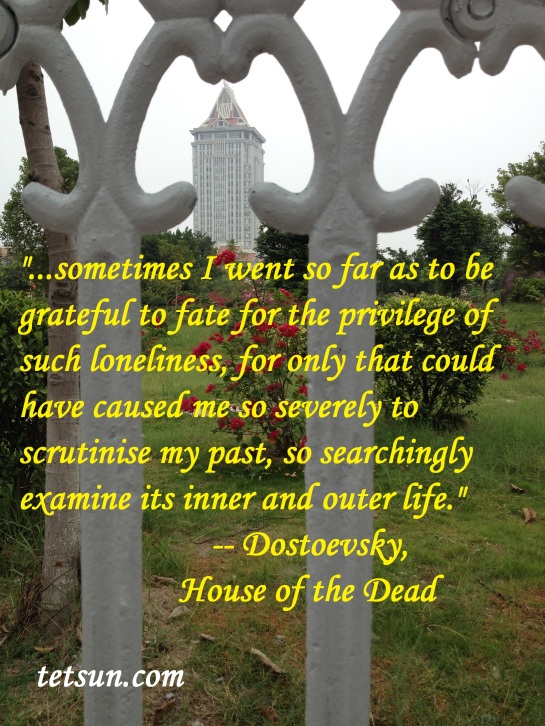 I just finished reading Dostoevsky’s House of the Dead or Prison Life in Siberia, and as I was reading about the different people he met in prison — the ones he liked, disliked, tried to avoid — I couldn’t help feeling life itself is like a prison. This feeling was made stronger after a friend complained about the shamelessness of a former colleague who had lied about his condition to the employer. He said he couldn’t stand working at the same place as this unscrupulous person. So I said to my friend, “I told you this is like prison. You can’t choose your prison mates!” 🙂
The main character, Alexander Petrovich, a noble, observed the peasants in the same prison he was in and said, “…you’ll never know what is at the bottom of the man’s mind or heart. You may think you know something about him, but it is all optical illusion, nothing more.” Isn’t this true of people, in general? It is truly impossible to know one person fully. How many times have you been surprised or shocked by something done by a person you think you know inside out, something so out of character?
Petrovich also said this of Suchiloff, the man who volunteered himself to serve the former, “It is indeed difficult to know a man, even after having lived long years with him.”
In our lifetime we sometimes have to live, study or work with people we do not like. It is stressful to always try to be polite with them, which we still do because it is what we were taught to do since we were kids. Be nice. Be polite. Be courteous. Perhaps we can learn from the main character, Alexander Petrovich, how to deal with the oppressiveness of a “prison,” surrounded by people with whom we are not comfortable: “I soon understood that work alone could save me, by fortifying my health and my body, whereas incessant restlessness of mind, nervous irritation, and the close air of the barracks would ruin them completely. I should go out vigorous and full of elasticity. I did not deceive myself, work and movement were very useful to me.”

Sometimes we create our own prisons. If we are aware that we put ourselves there, then we can get ourselves out of that prison. Unless we are too afraid of freedom, just like some convicts in Dostoevsky’s time “…poor devils who commit crimes in order to be sent to hard labour, and thus to escape the liberty which is much more painful than confinement….”
Why do some people stay in an unhealthy relationship for decades, for example? Could it be being in “prison” where their role is set is less painful? Or the person they are with, no matter how vile, is predictable and therefore not as petrifying as the uncertainty that freedom brings?
I think each of us has his own “prison.” Some have luxurious “prisons” — they have a materially rich and luxurious environment, but inwardly they are tortured by their own demons. Others probably have even worse than the barracks in Siberia in the 19th century — economically poor, uneducated, unemployed living in squalor among those who want to be forgotten by society. And there are those who have just enough — neither too much nor too little — but they get bored easily, so they create their own “prisons” and for some time their minds are “occupied” as to how to get out of it, and they may or may not admit to being responsible for creating it.
The House of the Dead, like all the other novels by Dostoevsky that I have read, leads the reader to think and re-think ideas or previously held ideas about humanity — individually and as a group. One critic of Dostoevsky berated his endless psychologizing and philosophizing, but to me, these are exactly what made his novels achieve greatness. His characters are people that readers get to know deeply, and with whom we can relate because underneath all the masks worn and personality and experience of each one, is a real human being, and no matter how vile a character may be, because we get to know him, then we understand and have compassion.
I know I’ve said this before in this blog: the more Dostoevsky works I read, the more I admire the man, the more grateful I am for his words.