There are a number of reasons to like this movie: for me， the first three would be Ethan Hawke, ETHAN Hawke and ETHAN HAWKE!!! And for my friend who recommended this movie, it’s Amanda Seyfried.

But if you are a huge fan of plot-driven films, this may not be your cup of tea. My friend thought this movie ran for 3 hours when it’s only less than 2 hours long.

The pacing is a little slow, even camera movements are predominantly slow. As I don’t have expertise in film, I can only say that as a viewer, I find the slowness a reflection of how Reverend Toller (Ethan Hawke) seems to be living his life — one day at a time, hardly any movement or willingness to move on.

There are several shots of the very white and neat exterior of the First Reformed Church in broad daylight, and probably the same number of shots of the dark bedroom of Reverend Toller. Sometimes there’s only one candle lighting the whole room. To me this  reinforces idea of the duality in his personality in how he presents himself to the outside world (one who has strong faith, knows how to deal with all kinds of people) and how he really feels and thinks about himself. He leads the service on Sundays, even though on his own, he says he is incapable of praying. (To me, though, his writing in his journal is an act of prayer.)

When Reverend Toller speaks with Michael, he speaks against despair. Ironically in the end, he fails to rescue Michael from that despair which turns out to be infectious as he, himself, tries to end his own life.

Mary, on the other hand, is the epitome of hope in her own quiet way — despite grieving the loss of her husband, she looks forward to having the baby that Michael had wanted her to abort.

Reverend Toller on the outside, exemplifies calm and composure, just like the ultra neat and white exterior of the church, but inside he is full of turmoil and uncertainty. His soul probably needs as much cleansing as his broken toilet that needs unclogging. And that metaphor becomes literal when he tries to use the drain cleaner to kill himself.

This duality is quite common. How many people do you know whose actions have surprised you as they are “out of character”? With Reverend Toller, however, there is dramatic irony— the audience are amply prepared for his decision to end his life, but the people around him are not.

Perhaps the one idea from this film that I liked best is restraint. Reverend Toller’s attraction to Mary is developed quite subtly. At first he seems to be simply a very dedicated pastor helping out a parishioner. But one scene that made me certain he is falling for her is that of the two of them cycling and, as he writes in his journal, “I had not been on a bicycle, I think, in 20 years. I was afraid I would fall.” And he went to muse on the curative power of exercise. There is a look of pure joy on his face as they bike on the trail.

Spiritual, though not as religious as Esther, Mary brings out the spiritual in Reverend Toller. With her, he can pray with words and with his soul. Yet, he has to restrain himself in his attraction to her. This he is able to do for a while, but after Mary appears before him as he is about to drink the drain cleaner, that restraint finally gives way to full expression in an embrace and a long kiss. This last scene is my favorite part — the feeling of finally letting out what you have been holding in for a long time is more than liberating. It’s exhilarating. 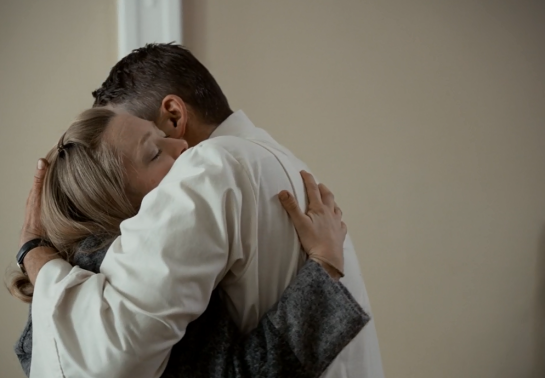 For me, this movie is simply another reason to love Ethan Hawke.

A Journal of Thoughts and Photographs