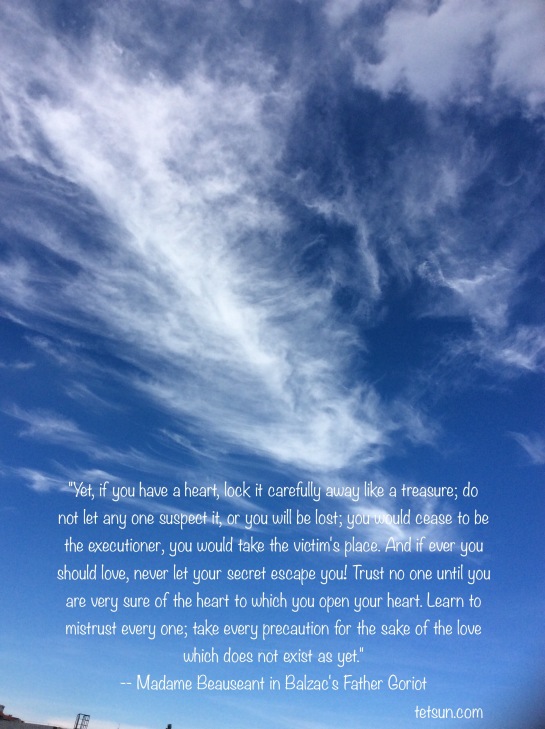 The title of this post is in quotation marks because it’s a reference to Queen’s song of the same title.  I was reminded of this song after I finished reading Balzac’s Father Goriot, which is such a tragic novel about a man who had spoiled his beautiful daughters, sacrificed himself for them but whom he didn’t get to even see before he died.

M. Goriot’s mistake was loving his daughters too much that he forgot to teach them what they needed to learn to be able to live independently. Perhaps his spoiling them was his way of making himself feel needed by his children for the rest of his life. And that he surely got from them — they needed and got his money until he was left with nothing except for the rags he was wearing.

One of his daughter’s, Anastasie, also made the same mistake in loving a man (not her husband) who made her happy but who was only using her to support his gambling. She gave up everything — husband, children, father, her reputation for this lover who only loved her for her money.

In a lecture by the neuroscientist, Vilayanur Ramachandran, he talks about a hypothetical situation where he, in his capacity as a neuroscientist, shows a woman the brain scan of a man who is supposed to be in love with her and which parts of the brain are activated. The woman says, “My God! Is that all? It’s all a bunch of chemicals?” Ramanchadran advises the young man to say, “My dear, this proves it’s all real. I really am in love with you. I’m not faking it….”

Now that we know that “love” is all a bunch of chemicals, we ought to be more careful about how it controls us.

If we are aware of how our bodies are reacting to the presence of another person, and we think it is “love,” we ought to ask ourselves if this “love” is right or wrong for us and the person we “love.” If it’s only “good” for our bodies, I don’t think it’s wise to simply give in. (My friend would say, “Jeez, just don’t think!” But I say, YOU HAVE TO THINK!)

Be it romantic love or fraternal love or paternal love, our actions should be guided by reason not just by what our bodies tell us. I know sometimes it’s easier said than done, but at least we can try.